The dates and lineup are set for Bonnaroo 2019 and this year’s fest has an incredibly wide-ranging bill in store for you. The 18th annual event is set to take place June 13-16 in Manchester, TN. 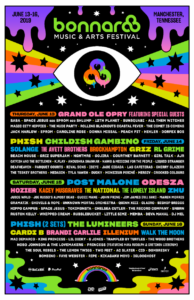 This year’s event features a “Sanctuary of Self-Love” campground experience curated by Hayley Williams of Paramore. Also, “The Yes Barn” presented by House of Yes and Little Cinema will once again feature jaw-dropping circus acts, mind-bending immersive cinema shows, wild theme parties, and Bonnaroo’s first-ever Pride parade. And, located at Plaza 7, The Ville – presented in partnership with Nashville Convention & Visitors Corp. and local maker-space Fort Houston – will showcase Music City’s most creative, most entertaining and most delicious food with surprise performances, interactive and illuminated art installations, and late night fun. The ever-popular Grove, also at Plaza 7, will return in 2019, offering a shaded retreat during the days with art installations, hammocks and more. The evenings will see the beautiful tree-filled space transformed by Nashville’s Fort Houston with more lights and inventive musical experiences than ever before. For more information, please visit www.bonnaroo.com/experience/camping-plazas. In addition, a pristine new wooded hangout is also being installed in a section of Bonnaroo’s Eastern woods that has never been publicly available to fans before.

With tickets purchased in all 50 states and over 40 countries around the world, Bonnaroo is a truly universal event. Since its very first day, Bonnaroo has lived up to its responsibility as one of the planet’s principal musical congregations by constantly pushing forward in its efforts towards environmental friendliness and sustainability. The only major event in the world with its own permanent solar array and compost waste on site, Bonnaroo has twice been recognized by the state of Tennessee, winning the Governor’s Environmental Stewardship Award as well as the Tennessee Department of Environment and Conservation’s Pursuit of Excellence Award. Complete details, as well as Bonnaroo’s annual report to the fans, can be found at www.bonnaroo.com/experience/sustainability.

Start planning your summer of festing now and snag your tickets to this truly universal and note worthy festival – cheers to Bonnaroo ’19!

Saad Ayub Releases ‘The Only One’ on Flashover Recordings

[youtube https://www.youtube.com/watch?v=nDXfi-BUmLk] After the success of his last release, ‘Remember’ (video above), Toronto-based trance DJ-producer Saad Ayub is back with another emotive dance floor…