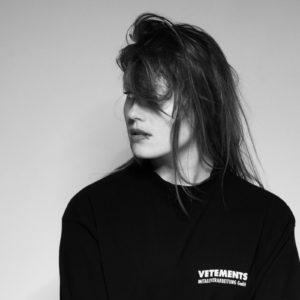 Brooklyn’s leading nightlife complex Avant Gardner is pleased to present Belgian techno star Charlotte de Witte as she makes a rare appearance in New York on Saturday, April 13 2019 from 10pm-4:30am. Bringing her heavy-hitting techno to the gritty and vast industrial space of the Great Hall, Charlotte will also be joined by two of Berlin’s most exciting techno artists on the rise: Dystopian favorite Monoloc and Brazilian-born Victor Ruiz as he makes his debut in the city that never sleeps. With three of Europe’s most exciting underground artists on the bill, this is a night sure to please techno tastemakers in New York. 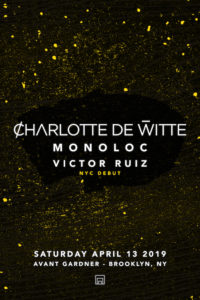 Charlotte’s rapid rise to the top has seen the young Belgian artist catapult to headlining slots on some of the world’s biggest festival stages in just a few short years. Having already graced the decks at Amsterdam Dance Event, Awakenings, Movement, Sónar and Tomorrowland, the 26-year-old’s love for hard and powerful techno has earned her a legion of fans from all corners of the globe. Making her Essential Mix debut in early 2018, the newly-appointed BBC Radio 1 resident now joins the ranks of some of the world’s most respected underground talent. Armed with a string of impressive releases that include tracks on Drumcode and Mary Go Wild Black, the talented DJ/producer will also be taking her beloved techno event series KNTXT on the road to Paris and London with more 2019 dates still yet to be announced. Known for her dancefloor first mentality, her highly-anticipated Big Apple appearance is sure to not disappoint fans of her uncompromising and headstrong sound.

One of Berlin’s most respected producers, Monoloc — who counts Âme, Chris Liebing, Dixon, and Rødhåd as fans — will also bring his brooding and sophisticated house and techno beats to the Brooklyn clubbing mecca. Having charted releases on Afterlife, CLR, and Dystopian, Monoloc has also played some of the world’s most iconic venues and festivals including fabric, Awakenings, and Melt, among many others. 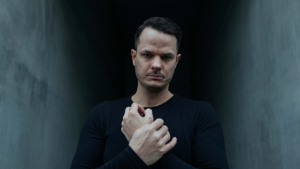 Making his New York debut, up-and-comer Victor Ruiz rounds out the bill. Known for his high-caliber techno productions and exceptional edits of classic songs, the Brazilian artist has also remixed some of the biggest names in the scene including Dubfire, MOBY and Stephan Bodzin. Intertwining classic edits throughout his sets, this is an artist sure to impress. 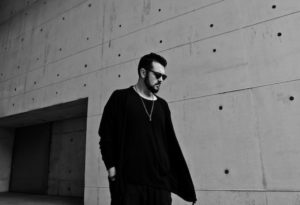