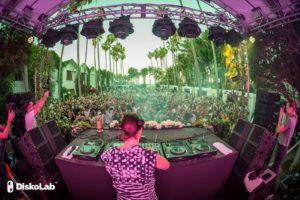 Diskolab has announced over 30 parties during Miami Music Week! One of dance music’s fastest growing brands and after another record breaking year, it now makes a huge statement with more than 30 parties announced for this year’s Miami Music Week. They will once again take over the best venues in the city from raw and artistic warehouse spaces to luxury pools, and welcome the world’s most recognized brands and globally acclaimed DJs to party with them, covering all forms of electronic music in late March.

Leading the charge is the monumental and historic 10th Anniversary of No Sugar Added. What started as a small event with tomorrow’s superstars has now grown into a multi-venue day and night party with the biggest names in dance music set to headline. Part one is at Sagamore Hotel, which is where the famous No Sugar Added story started, while part two moves to the massive RC Cola Plant in Wynwood for an all-night celebration.

Get your tickets here now!

The Spinnin’ Hotel: Spinnin’ Sessions will take you on a house rollercoaster with ALOK, Bingo Players, Bassjackers, Lucas & Steve, Mesto, The Him and more.

Mana Wynwood: After sundown, the one and only DJ rockstar Steve Aoki hosts a special Dim Mak party with special guest Don Diablo plus 4B, Slushii, Henry Fong, and surprise guests!

The Spinnin’ Hotel: Robin Schulz will be coming out to party with a big selection of his friends!

RC Cola Plant: Trance titans Above & Beyond roll into town with special guest Seven Lions and more to be announced.

Mana Wynwood: Brownies & Lemonade are taking over with Dog Blood (Skrillex & Boys Noize) and a range of special back to back sets with names like Cray, A-Trak, Whethan, 1788-L, Blanke and more secret guests.

The Spinnin’ Hotel: Heldeep are in town on March 29th for their own pool party, while fans of dreamy deep house will be excited by the All Day I Dream party at Delano Beach Club with Lee Burridge, Bedouin, Newman and Hoj.

Delano Beach Club: Deep house fans get excited for the All Day I Dream Party with Lee Burridge, Bedouin, Newman and Hoj.

The Spinnin’ Hotel: Sander van Doorn will be curating his own 15 Years of Identity Tour with a very special set from him as Purple Haze plus more.

The Spinnin’ Hotel: Spinnin’ Deep offers a deeper take on house music at the iconic label’s own hotel.

The Sagamore Hotel: Klingande is bringing his Playground Pool Party.

C&L Warehouse: Audien & Tritonal are teaming with special guests to be announced.

Diskolab Miami Music Week line ups and parties to be announced at here.