Imagine creating a platinum-selling debut album, earning THE CALLING one of the biggest Alternative Rock radio songs of the 2000’s. The hit song [Wherever You Will Go] stayed on the charts for over 20 weeks and became the song of the decade. The song was also featured in multiple movies and shows over the years.

Now, the adversity part…Alex was drained emotionally and financially by record label battles that hindered the release of new material for years. Then Alex was diagnosed with Parkinson’s.

The next event was something out of a movie script. In 2013, Alex was kidnapped and later found bloodied and beaten on the side of the road in Lapeer, MI. THE CALLING was in Lapeer to perform at Lapeer Days Music Festival and it was reported that Alex left his hotel room to walk to a local convenience store around 3 am when a van pulled up alongside him and he was snatched inside. To make matters worse, some idiot alleges the incident was a hoax and a publicity stunt which was so far from reality.

Fast forward to the present. I was in Sacramento on business when I was walking past the live music venue HARLOWs when I noticed THE CALLING on the marquee. I thought to myself, “Is this a cover band?” I later discovered it was the real deal. So I made some calls and scored access to the show, but more importantly, an interview with Alex.

After speaking with him and hearing of all of the things that have been thrown at him over the years, to see and hear his passion for the music he creates and shares with us is still so strong, was amazing. Alex was able to channel all that negativity from the adversities and challenges he faced into something positive – his music. And that is something!

The show was kickass and the new material that was showcased will undoubtedly catapult THE CALLING back to platinum record status.

The FestPop family is rooting for Alex and the rest of THE CALLING. 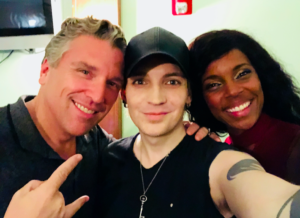 GrooveFest is the ultimate party in paradise, and is now only just around the corner. Today they announce their brand new arenas and stage…