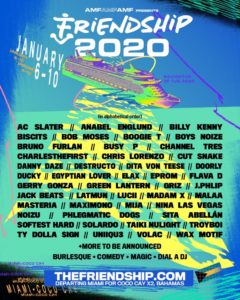 AMFAMFAMF presented FRIENDSHIP as a world-class music cruise experience in late 2018. Due to the event’s huge success, the event will be taking place in 2020 just after the new year on from January 6th to the 10th. Guests can look forward to seeing American DJ and Michigan native GRiZ, British record producer Troyboi, Rapper and singer Ty Dolla $ign (Live) and many others. Not to mention Dita Von Teese will be returning to perform her burlesque show.

Fun fact: On the last cruise there was an option to “Dial-A-DJ,” where cruisers could dial a special # to have a DJ delivered to their room for a private set.

Here are the confirmed acts for the second annual FRIENDSHIP (in alphabetical order):

Those looking to attend can look for more music artists to be announced in the coming weeks as well as details regarding comedians, special magic shows and other onboard entertainment.

About the Ship & it’s Adventures

Beyond the epic performances and parties onboard curated by FRIENDSHIP’s founder Destructo, shippers will find themselves this time on the Navigator of the Seas, Royal Caribbean’s ship which recently underwent a $115 million-dollar upgrade. Check out the current updates to the boat’s upgrades HERE.

FriendShippers will also return the private eco-certified island of CocoCay, in the Bahamas. It’s brand new $250 million-dollar upgrade which includes a dock and massive water park will allow FRIENDSHIP to stay later into the evening for island parties. With multiple beaches, pools, zip-lines, floating bars and bungalows, attendees will find it the perfect slice of Bahamian paradise with sun, fun and tunes on white sand beaches. View the video of Coco Cay here.

The inaugural FRIENDSHIP took place late 2018 aboard the glamorous Celebrity Equinox and sailed from Miami to two private island beach parties in CocoCay, Bahamas. The four-day/four-night electronic music cruise was attended by 3000 revelers and sold out in less than 24 hours. It featured live performances and DJ sets from some of the best and most-popular international music acts, including Rüfüs Du Sol, Boys Noize, Dixon, 2manydjs, Claptone, and many more.

Look out for photos and further announcements on AMFAMFAMF social channels below. 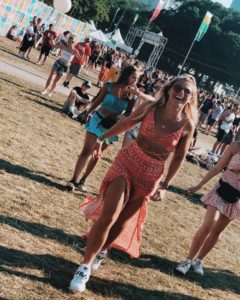