AIRBEAT ONE Festival has officially declared its’ full lineup for its’ 2019 edition. From July 10th to the 14th the “Who’s Who” of the DJ elite will meet for the 18th time on the eye-catching airfield in Neustadt-Glewe. North Germany’s largest electronic music festival will return for another year after visitors year after year find themselves in front of the huge Mainstage. As a matter of fact, in the past years visitors have found themselves infront of the Incas in Peru, in front of the Coliseum in Rome, infront of skyscrapers in Tokyo, the Capitol in Washington and even the Big Ben in London. In 2019, the journey will lead to India.

This year, 200 of the best DJs and artists from all over the world will perform at the AIRBEAT ONE. Fans can watch their favorite DJs and artists on 6 different stages. A total of 34 acts from the Top 100 of the British DJ magazine follow the call of the Maharajah. They will depart on the airfield in Neustadt-Glewe. 21 of them will perform on the Mainstage. Something to note is that no other festival in Germany has made that happen! 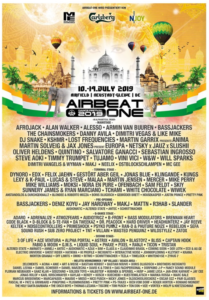 Still a secret: What will the gigantic Mainstage look like? Is it the famous Taj Mahal in Agra, the Red Fort in Delhi or the huge mosque Jama Masjid? The veil will not drop until the first day of the event. While you have to wait to see what the Mainstage will look like, here is the set lineup for one of Europe’s biggest Mainstages:

Two exclusive premieres can be eagerly awaited at the AIRBEAT ONE Festival: MARTIN SOLVEIG & JAX JONES presents EUROPE, followed by NETSKY b2b JAUZ b2b SLUSHII. Three DJs on one Stage! Can someone say get me to this Festival NOW!

In the last years, the Terminal Stage was bursting at the seams. That’s why the area is moving to the “biggest circus tent in Europe” this year! Artists like EDX, Felix Jaehn, Gestört aber GeiL, Jonas Blue, Klingande, Kungs Lexy & K-Paul, Martin Jensen, Mike Perry, Mike Williams, Nora en Pure, Ofenbach, Sam Feldt or even Tchami take the visitors to a colorful journey with electronic sounds.

The roots of Goa are in India. So for sure Goa will not be missing at this year’s edition of the AIRBEAT ONE festival. Therefore, the line-up of the Second Stage has been increased again. In total 46 artists will play on the three festival days. With acts like Ace Ventura, Ast-rix, Bliss, Captain Hook, Fabio & Moon, G.M.S., Liquid Soul, Phaxe, Ranji, Ticon and Zyrus 7, the hottest names of the Psytrance and Goa scene are included.

Not only was the Festival a success last year but also, the big pre-opening party last year was a hit. But on the Litchis, ehm, laurels will not be rested at the AIRBEAT ONE festival. Therefore, the bar in 2019 has been set somewhat higher. From the 10th to the 11th of July, the visitors can get into the right mood. For this, two of the six floors will be open to be played by 5 DJs and a DJane from the renowned DJ Mag Top 100: BASSJACKERS, DENIZ KOYU, JAY HARDWAY, MATTN, R3HAB, SLANDER. The festival’s pre-opening will be completed by Makj, Audiomatic, Altered State, Antec and Schrittmacher.

The AIRBEAT ONE Festival is Northern Germany’s largest electronic music festival. It attracted 180,000 visitors from 50 countries to the airfield in Neustadt-Glewe last year. With the groundbreaking Mainstage designs, the spectacular line-up and the numbers of visitors, the AIRBEAT ONE Festival has long since reached the ranks of the world’s most important festivals such as Tomorrowland, Coachella or Ultra Music.

Purchase your tickets and camping passes for AIRBEAT ONE today!

All in all, for more information on AIRBEAT ONE Festival, follow its’ socials: