Walking up to the Roots Stage at Riot Fest, at 1 p.m. on Sunday afternoon, the crowd was sparse. That’s no surprise, considering it was the last and hottest day of the weekend, and many tired patrons were probably nursing their hangovers so that they could make it to the headlining sets around the time the sun went down. But once Beach Goons, a little band from the pop-punk haven of San Diego, took the stage, it was clear that most people in the crowd were not just killing time before the Blondie show. They sang back every word. 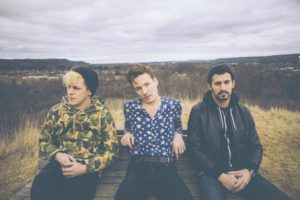 The stage itself was sparse as well, with vocalist/guitarist Pablo Cervantez, drummer Chris Moran, and bassist David Orozco giving themselves plenty of space to exert the boundless energy of a band who is just so happy to be there. After watching multiple too-big-to-fail bands over the weekend lean on their radio hits and general clout, it was refreshing to see a few kids put on a show.

Though their musical influences and interest range from Gucci Mane to Suicidal Tendencies to Adult Mom, they cite Guitar Hero and School of Rock as the main reasons they first picked up their instruments. “The number one reason I started playing music is because of School of Rock,” said Orozco. “If I had never seen that movie I might have never joined a band.” The Beach Goons have a sound uniquely different from their pop-punk predecessors, but they follow the genre’s tradition of not taking themselves too seriously. If you go on their Spotify, the only thing that is written in their bio is, “we hate the beach. – Beach Goons”

The band is currently touring their second album, hoodratscumbag, which was released on GRNDVW in August. Writing the album was a collaborative process but is spearheaded by Cervantes, who writes all the lyrics. “If it’s coming out of Pablo’s mouth, he should be writing it,” said Orozco. “This [band] is Pablo’s brainchild.” 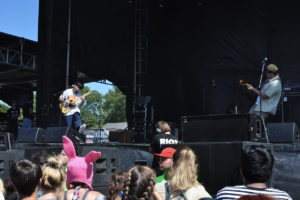 Since releasing the record, Beach Goons have been touring across the country, most anticipating their show at Atlanta’s storied venue The Masquerade and citing Cleveland as their favorite stop so far. But the whirlwind of touring has naturally forced some lifestyle changes, such as exclusive survival off of almonds and water, only eating home-cooked meals in the select cities where they happen to have family. When asked how they stay healthy on the road, all three reply in unison: “We don’t.”

All three band members are descendants of Mexican immigrants, and they make sure that their heritage is one of the first things new fans are aware of. They covered Ritchie Valens’ “La Bamba” at Riot Fest, shouted out an audience member waving a Mexican Flag in the middle of the set, and incorporate Spanish lyrics into many of their songs. “All I gotta say is we’re brown, we’re proud, and we’re loud about it,” said Cervantes. “I hope that it bleeds into what we’ve written.”