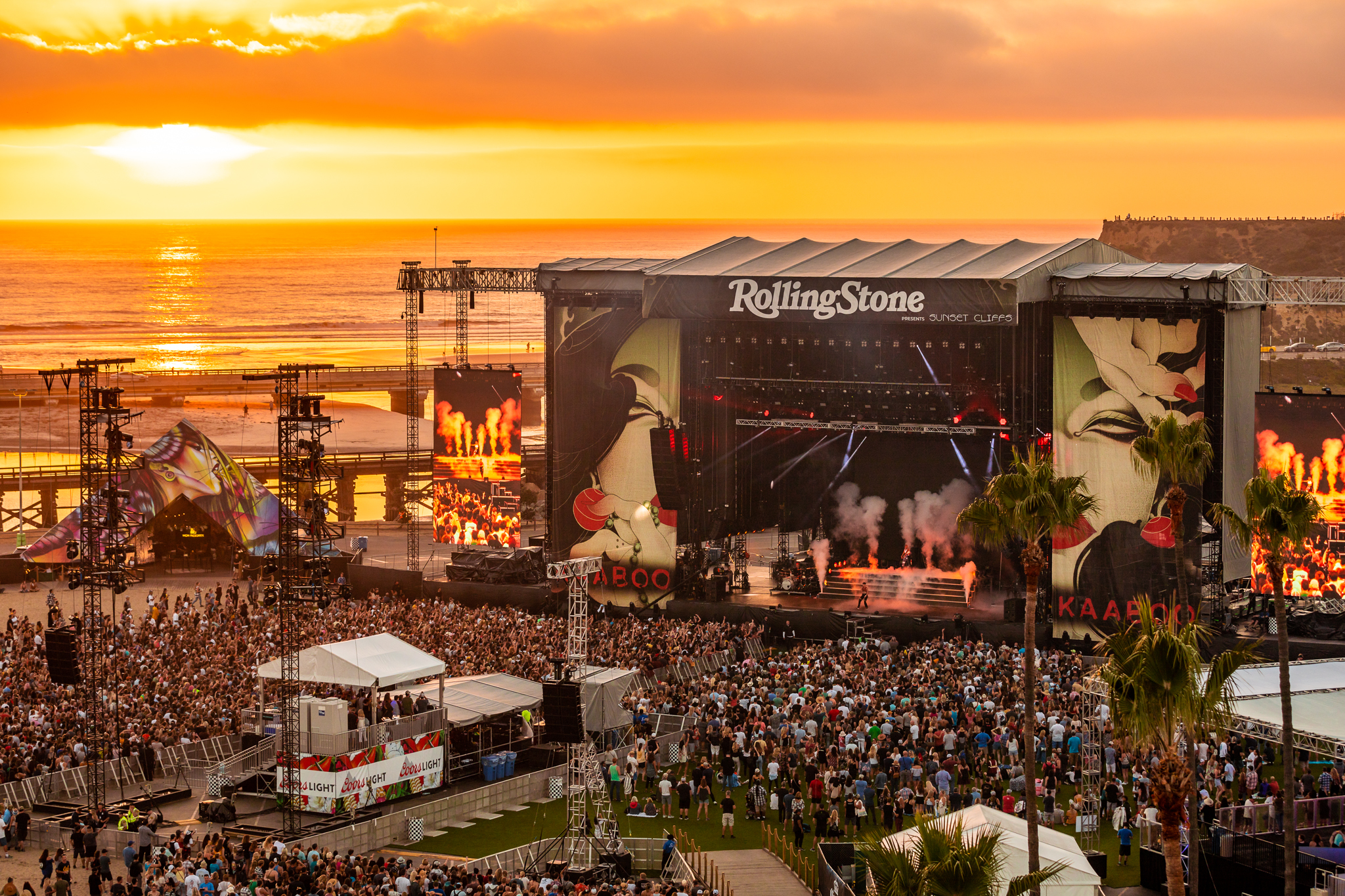 It all started when we saw the lineup for 2018’s KAABOO Del Mar earlier this year, and we just knew it was going to live up to the very high bar set in previous years. Having attended every iteration of this four-year-old Southern California festival we can definitely say it did. For the uninitiated KAABOO Del Mar is a three day music, arts, comedy and culinary festival that takes place in the coastal town of Del Mar at the Del Mar Racetrack, where “the surf meets the turf” as they say. Nestled right up against the Pacific Ocean it provides amazing views to go along with all the delights for your other senses. This year’s festival took place over the weekend of Friday September 14th through Sunday September 16th. Initially billed as the “un-festival”, KAABOO Del Mar takes great care to remove all the things that suck about many festival experiences. Clean bathrooms with flushing toilets (and plenty of them), top notch cuisine, craft beers and spirits, and almost no long lines for any of it are among the hallmarks of this festival. While KAABOO feels like it caters to a bit of a more well heeled crowd, with its three levels of VIP experiences featuring private bars and viewing areas with fake grass, it’s always been a very diverse crowd. Seems there’s something for everyone from 18 to 80 and this year was no different. This was the first year the festival was completely sold out and it was obvious. You could absolutely feel the crowds were larger than in previous years, but the organizers handled it well.

Getting In and Getting Out 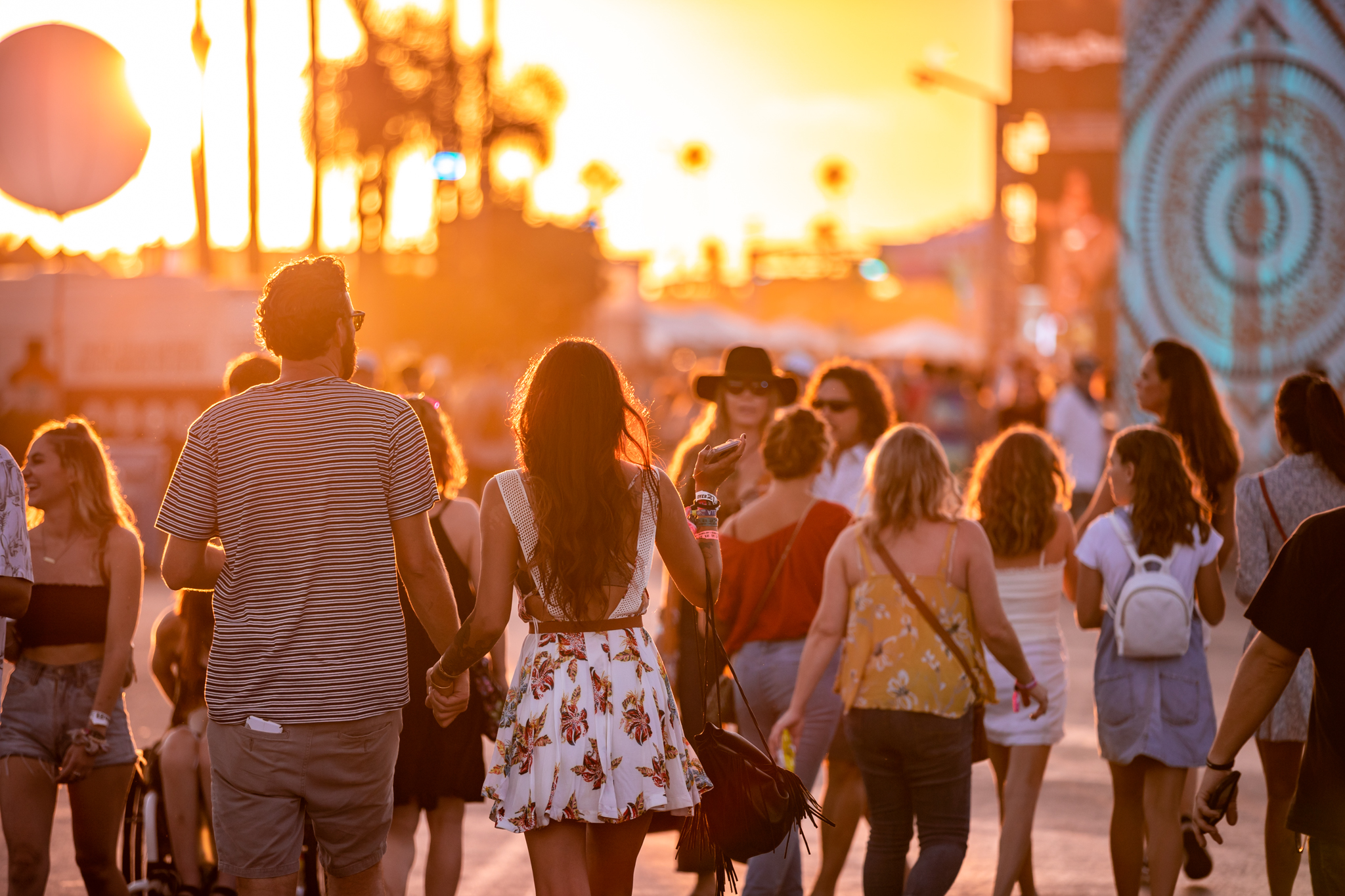 One thing that KAABOO still hasn’t quite figured out is the getting in and getting out part of this festival. This year the ride sharing drop off and pick up point was moved to the back side of the festival grounds. While it allowed a much larger staging area for drivers to wait and appeared to lower the time before you pick up arrived, it meant a much longer walk into the festival grounds than in previous years. Like forever. Trams were running, but often that wait was more than 10 min, which was still better than the 15 minute walk around the length of the entire horse racing track. Yeah, it’s far. Golf cars we’re running to shuttle in anyone who needed ADA access. If you had purchased a parking pass and drove yourself, there was a much shorter walk in from the parking lot, but we were told that the delays of getting in and out with your own car made it no better.

The Grounds and Amenities

Once we passed through the gates we were treated to the KAABOO experience we’ve come to expect. Food, beverages, and bathrooms were all very well spaced throughout the huge festival grounds. There was nowhere that required more than a 100 yard walk to get a drink or a bite. As usual the featured food and drink were top shelf all around including Poseidon Del Mar, Searsucker, Broad Street Oyster Company, STK, Wicked Maine Lobster, Red O, and Oceanaire to name a few. Beer, wine, and spirits were flowing from the likes of Ballast Point, Cutwater Spirits, Clos Du Bois, Saint Archer Brewing Co., Magic Hat, Hendrick’s Gin and others, with over 35 in total. The “Palate” indoor area with these featured food and drink purveyors was also air conditioned, so it provided a nice escape from the heat of the day while checking out the featured vendors. There were numerous food truck options on the main drag of the festival that connected the two major stages featuring upscale pizza, dogs, burgers, tacos, bbq, and more, as well as eats and drinks near every stage. Just like last year KAABOO featured cashless RFID wristbands that made purchasing a breeze.

There is a TON to experience at KAABOO beyond what you get at your average festival and don’t even bother trying to do it all. There are way too many things to do here. You might check out the pop up beach, Bask by Wet Republic or catch an instructional culinary demo by one of the dozen featured chefs on the lineup. If art is more your style you could visit one of the 20+ art installations and even purchase some of them. Ten galleries were featured at KAABOO and around 40 individual artists were on site showing off their work as well. Comedy sets were happening throughout the day and night with featured comedians including Craig Ferguson, Iliza Shlesinger, Kevin Nealon, Tom Papa, Craig Robinson, Pauly Shore, Orny Adams, and many more. For those of us who weren’t ready to shut it down at 10pm, Friday and Saturday featured a Silent Disco with multiple DJs and electronic artists.

The immense musical lineup is what draws most of us here and at KAABOO Del Mar there is something (lots of somethings really) for everybody. Once again KAABOO boasted a massive list of over 70 musical acts, spanning from the late 60s to today. Here are a few of our favorite performances: 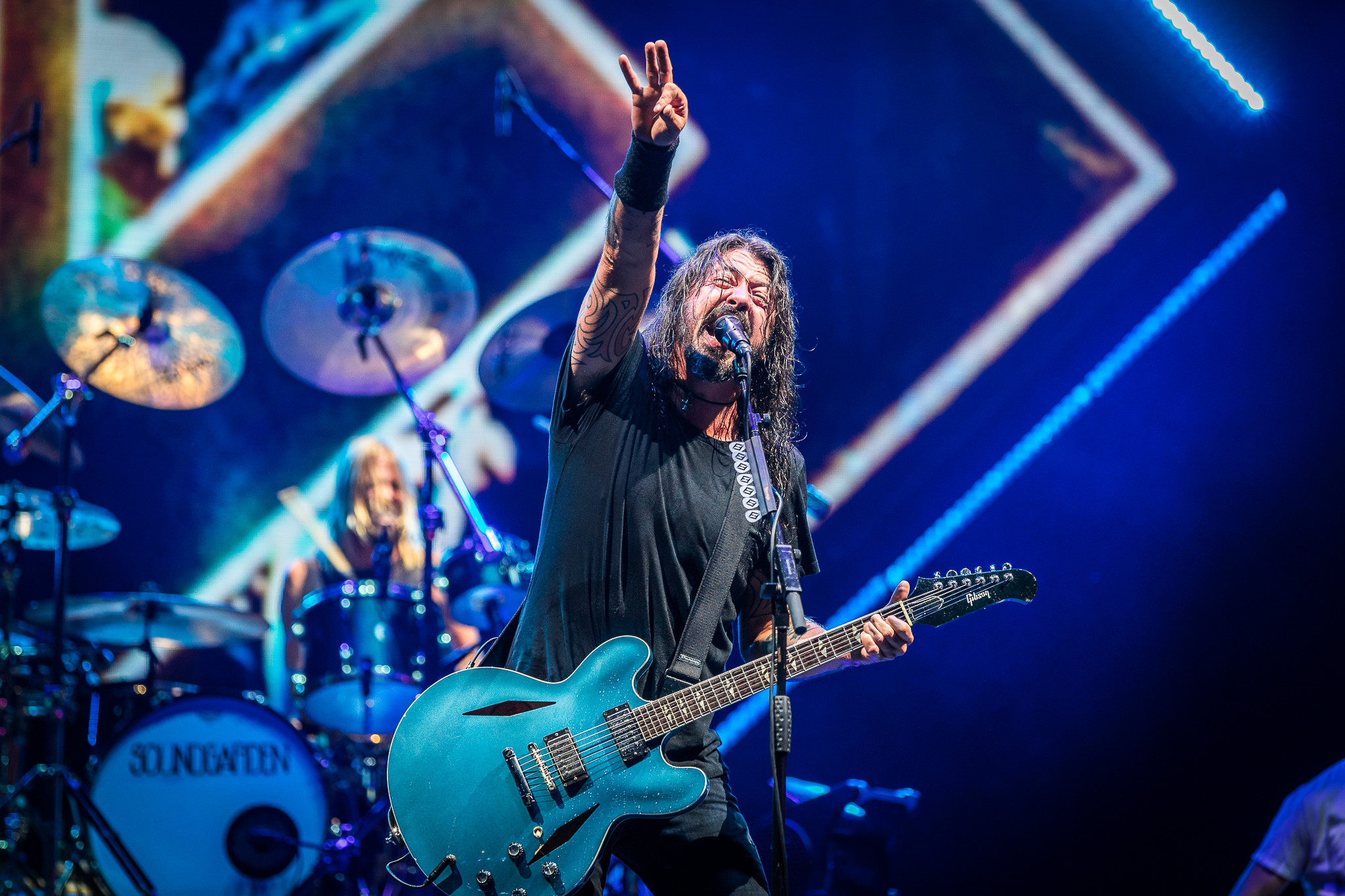 If Dave Grohl isn’t Mr. Rock & Roll, we don’t know who is. Near the top of their set Grohl told the crowd “We usually play for at least three hours so I guess we’ll go till they turn the power off!” They opened the set with All My Life and closed with Everlong while touching the hits you’d want to hear in between. Grohl dedicated Monkey Wrench to Gucci Mane, who had played earlier in the day, and we’re still trying to figure that one out… The Foo’s set featured an awesome covers medley of Another One Bites The Dust, Imagine, a super weird but amazing slow cover of Jump, and Blitzkrieg Bop. They followed that up with Dave Grohl taking over the drum set from Taylor Hawkins and Taylor taking the mic for a cover of Under Pressure, with Dave singing Bowie’s part and Taylor singing for Freddie Mercury. Without question they delivered a non-stop, high energy performance. 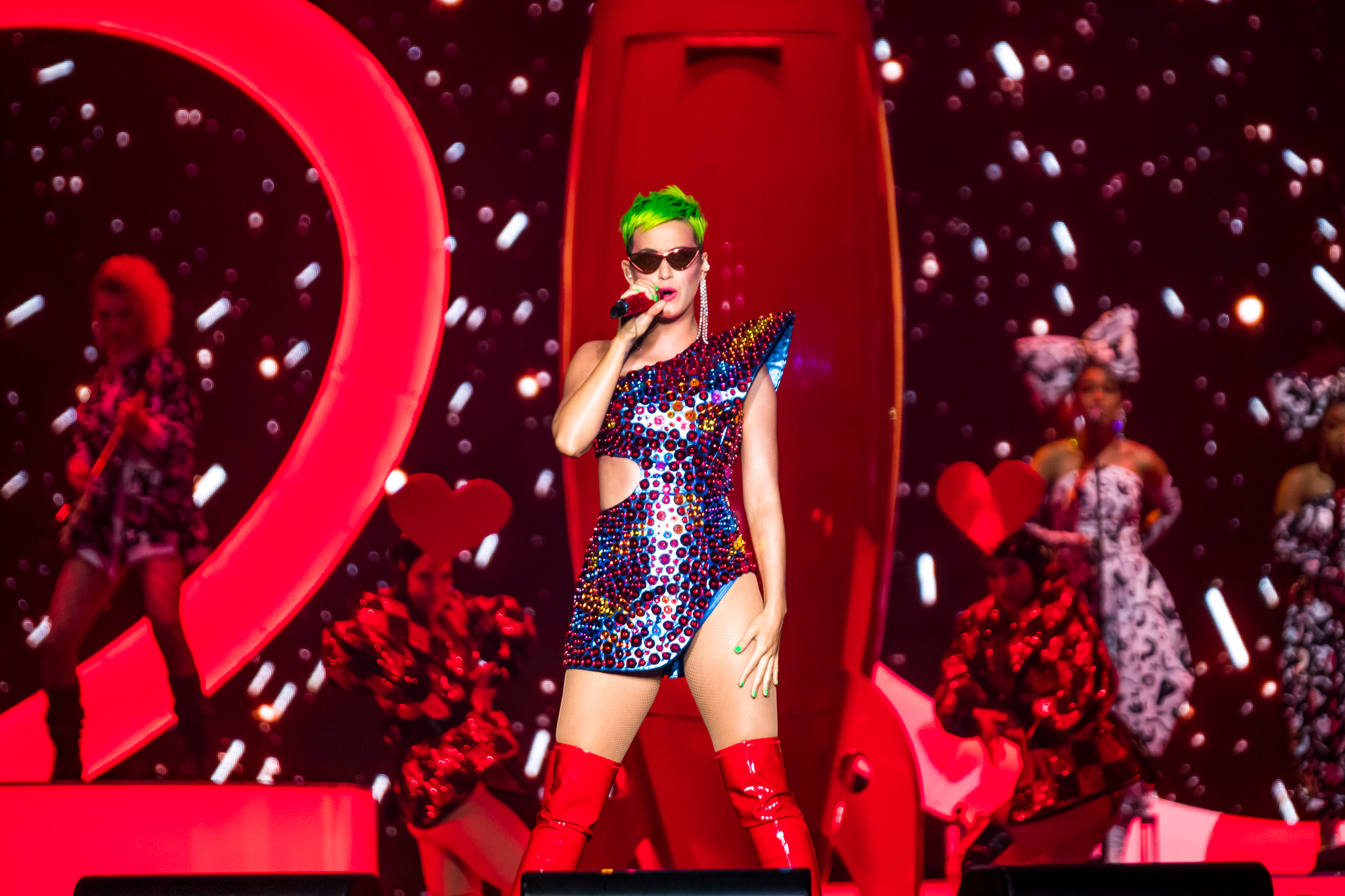 Making the final stop on her nearly year long world tour, Katy Perry gave her fans exactly what they were looking for. Featuring five acts complete with costume changes and an encore, a cameo by that left shark, fireworks, levitating stages, close to a dozen dancers, and rocket ship entrance and exit, this way by far the most high production performance of the weekend or any previous KAABOO weekend. It felt a bit odd as the way to close out the event on Sunday night, as it was a stark contrast to the late great Tom Petty wrapping up the weekend last year, but Perry delivered nonetheless. After a few opening songs she told the crowd “When I go to a music festival I want to hear the hits, so let’s get into it!” She played over 20 songs including all the hits fans were looking for like Dark Horse, Teenage Dream, California Gurls, I Kissed A Girl, and Roar. Breaking up the set in the middle with a cover of Joan Osborne’s One Of Us to slow things down and then closing out the Encore with Firework as tons of fireworks and other pyrotechnics exploded in the night sky. 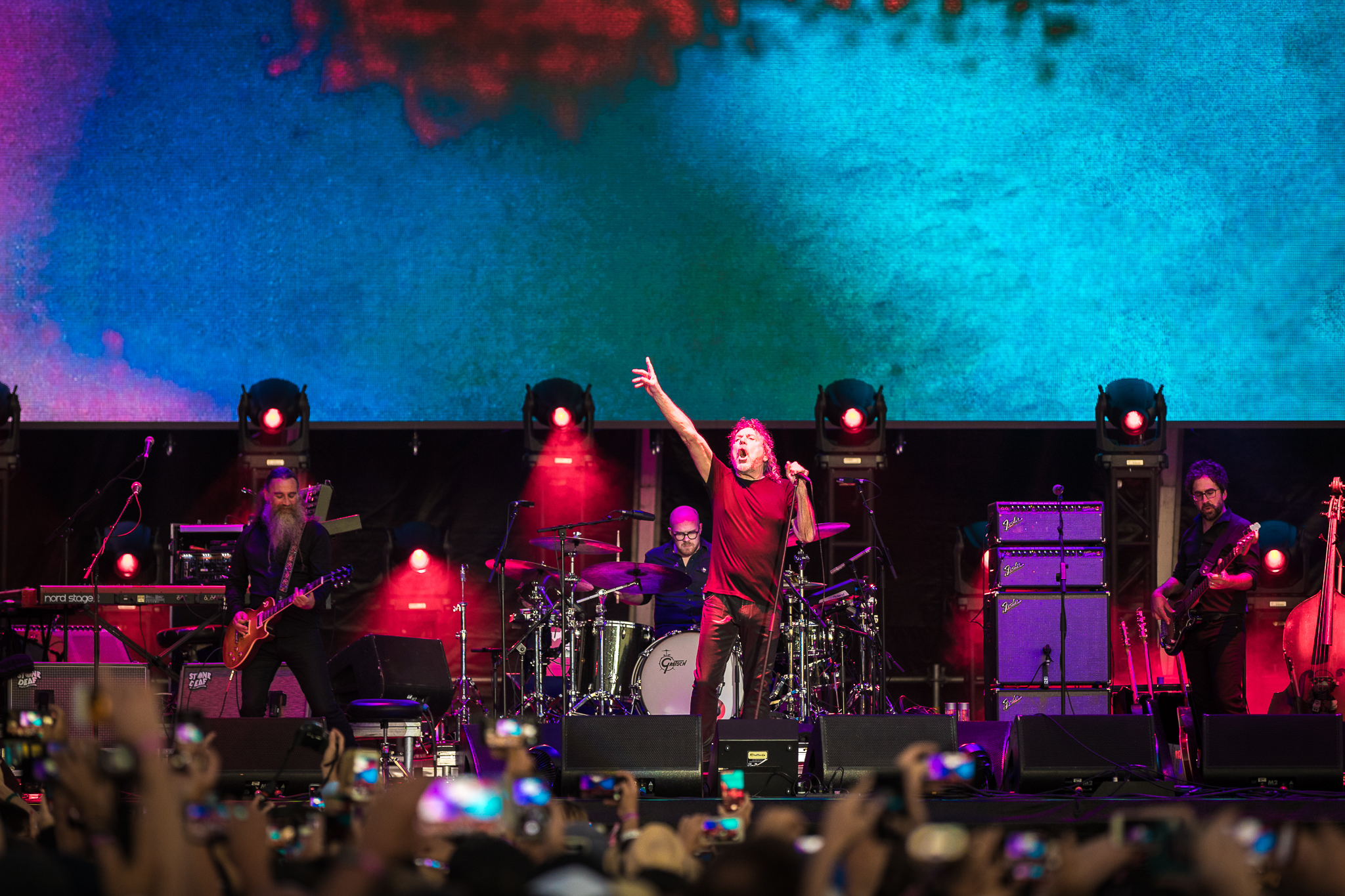 Walking around the festival on Sunday there was a distinct feeling that while Katy Perry was the headliner, Robert Plant was the performance a whole lotta people were there to see. Plant and crew drew a massive crowd that was made up of everyone from twenty somethings to fans who definitely saw Led Zeppelin live. Opening up with Good Times Bad Times and then going right into The Lemon Song, this is as close as you’re going to get to a Zeppelin show in 2018. Featuring new work as well staples including Going to California, Babe I’m Gonna Leave You, and Black Dog, Plant showed us he’s still on top of his game.  He closed out the set with a medley of Bring It On Home / Whole Lotta Love / Santianna / Whole Lotta Love, and for many that closed out their KAABOO weekend. 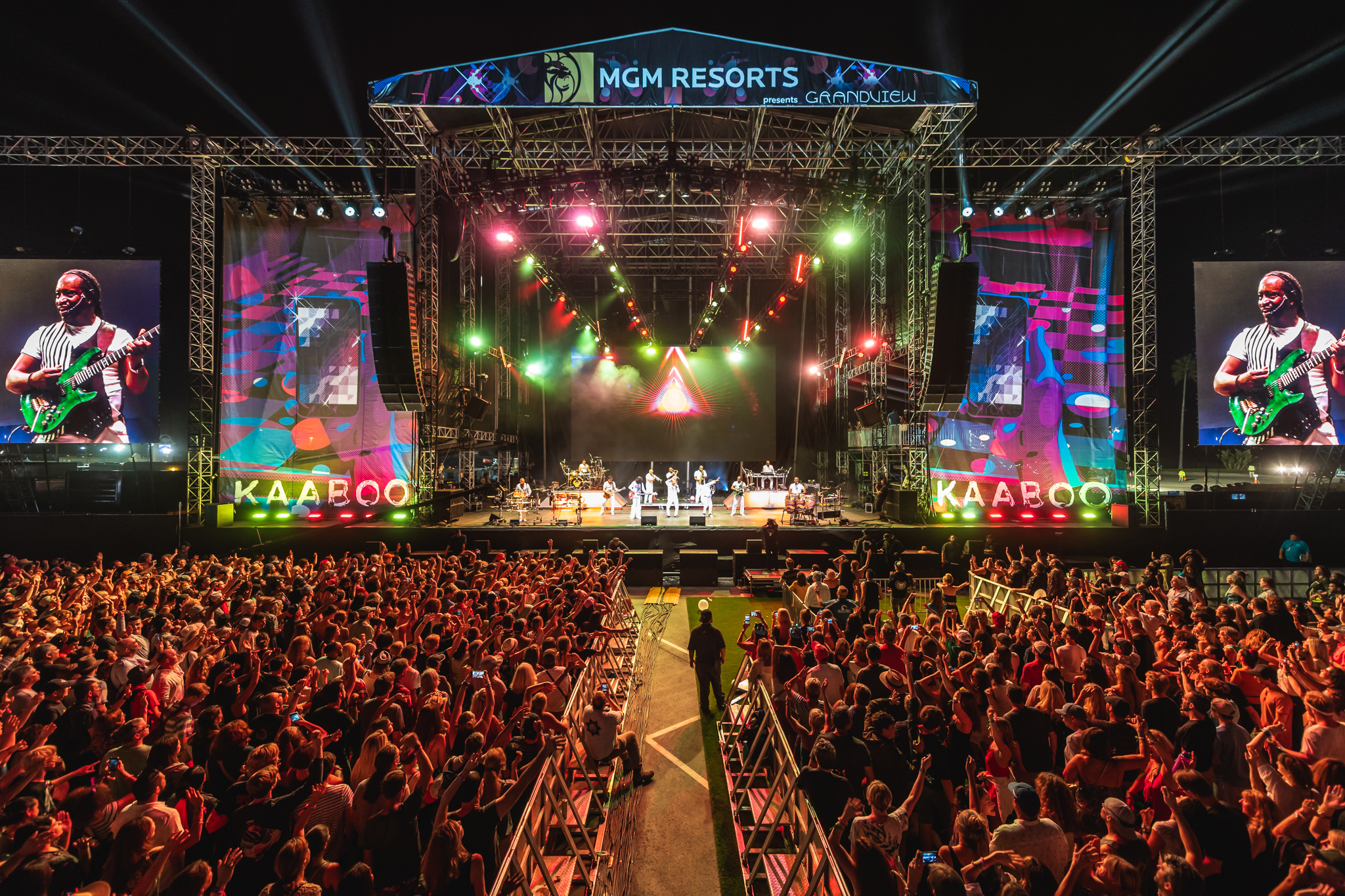 KAABOO seems to have an amazing ability to deliver fantastic performances from artists who have been around a long time. This was our biggest unexpected standout performance of the weekend. Having never seen Earth, Wind & Fire Live we weren’t quite sure what to expect, but man did they blow it up! A high energy show and amazing visual stage performance they kept the crowd dancing with hits like September, Boogie Wonderland and Shining Star. We have no idea how many total band members were up there playing on stage (there were three drum sets for starters), but they were all getting down!

KAABOO Del Mar 2019 Early Bird tickets are already on sale, so get on it and we’ll see you there next year!

﻿ Bonnaroo has earned its’ place as one of America’s destination ever since its start in 2002. Rolling Stone immediately decreed Bonnaroo as one…