The silver-haired, angel-voiced siren, Billie Eilish, will be hitting Portland’s Roseland Theater & Grill on October 23rd. Taking a break from the festival life, she will have the entire stage, audience, and night to herself. At the young age of 16, she’s quickly captivated hearts all over the world with her genuine, self-reflecting lyrics and lullaby melodies. She’s one artist to keep your eyes on as she skyrockets up the charts and becomes a staple in modern music.

Fans can be sure to hear their favorites performed at Billie’s solo concert. Songs include: 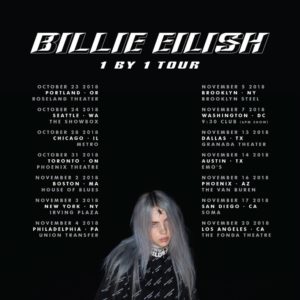 Khalid has been known to make a special surprise appearance for their collaborated hit, ‘Lovely‘. The audience may want to keep their eyes and ears open for his contribution to her show. Along with her original hits, she throws in a couple of fun and unexpected covers to shake up the crowd’s energy.

The Roseland Theater & Grill resides on the corner of W Burnsides St and NW 6th Ave, located in the Old Town Chinatown of Portland, Oregon. Equipped with a colorful backstory (it’s haunted!), it is a beacon of familiarity in the city. The main floor is standing room only with limited seating in the balcony, suited for concert-goers over the age of 21. The max capacity hits at 1,410, and with first come, first serve being the rule of thumb, it’s best to get in line early, especially with general admission tickets. Don’t forget to stop by the venue’s restaurant, Peter’s Grill, if you’re feeling a bit peckish or need to stay hydrated for Billie’s high-energy performance. Parking is a little scarce near the theater so prepare to pay to park a few blocks down at the various parking garages or patrolled lots in the area.

*Event is currently sold out

Tickets for the 1 By 1 Tour at the Roseland Theater can be purchased: HERE!