Cal Jam 18 returns to San Bernardino, Calif., for another legendary weekend of rock-n-roll. The festival, promoted by Live Nation, kicks off the first weekend of October (Oct. 5-6) and will feature over 20 bands on four stages. 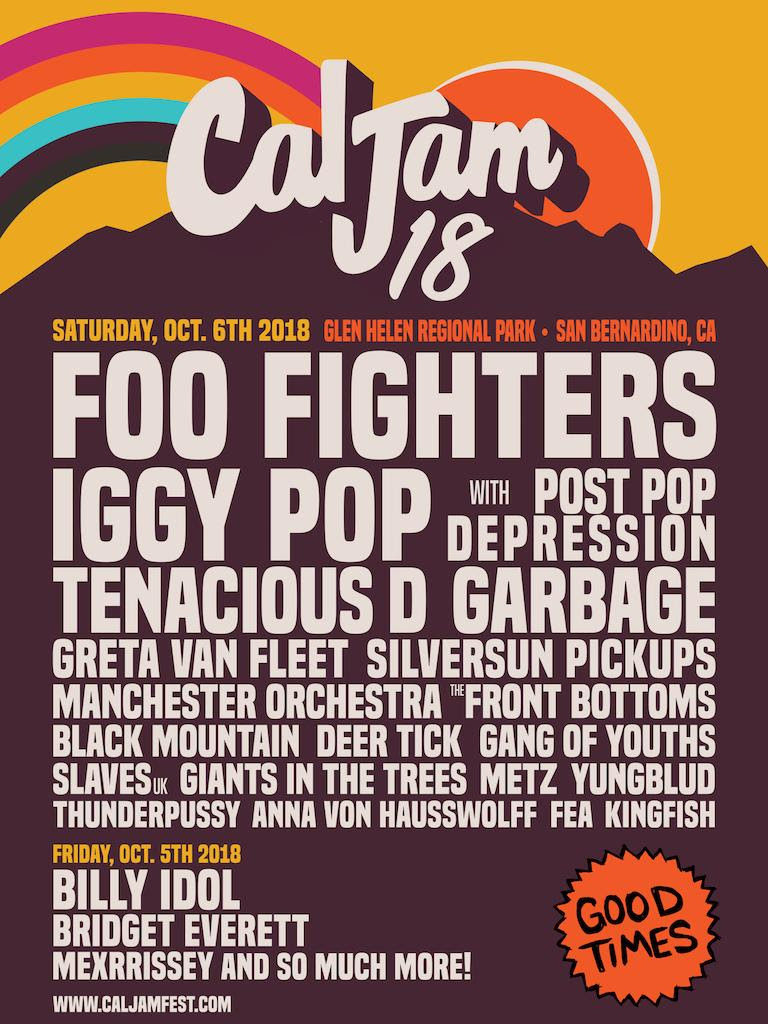 The Foo Fighters are back as well, as the festival’s headliners and curators.

Cal Jam will continue last year’s tradition of a 12-hour rock extravaganza where anything can happen. Just last year we saw the likes of Joe Perry, Rick Astley, Dave Koz, Liam Gallagher, and more joining the Foo Fighters on stage (and yes, all during the same show).

The party begins Friday night (Oct. 5) with 80s punk legend Billy Idol. Joining him on the Friday night lineup is comedian Bridget Everett and Mexico City’s Mexrrissey. Those with camping and Friday night tickets will get to rock out to the music and also get first access to the carnival rides and Rock-N-Roll Museum.

On Saturday the rock-n-roll marathon kicks in to full gear. Taking the stage will be some of the best that rock and roll has to offer including Greta Van Fleet, Silversun Pickups, Manchester Orchestra, and the incomparable Jack Black and Kyle Gass of Tenacious D.

Also this year, Dave Grohl and crew have set themselves up to play after one of the hardest acts to follow in live music: the legendary Iggy Pop. Iggy’s Cal Jam 18 performance will be an exclusive one-off reunion with the all-star Post Pop Depression band that backed him on the handful of shows played in support of the album of the same name. The band will feature Queens of The Stone Age’s Joshua Homme, Dean Fertita and Troy Van Leeuwen and Arctic Monkeys’ drummer Matt Helders.

The good times come at an affordable price at $99 (plus taxes and fees) for one day GA. New this year, Saturday ticket holders will have the option to buy a Friday night ticket for just an additional $30 (plus taxes and fees). All camping packages include free entrance to the Friday night Party. Tickets and camping packages go on sale this Thursday, May 17th, at 10AM PST.

Stay tuned for full schedule to be announced!

T.I. “WHAT YOU KNOW” DUBSTEP REMIX BY CRIZZLY

Here we have a remix of a classic — T.I.’s “What you Know.” Well, it’s a classic to those of us were under the age…