Mark your calendars everyone, Kaaboo Del Mar is back for its 4th annual event happening September 14-16 and the lineup is a banger. With headliners like Foo Fighters, Imagine Dragons, Katy Perry, Robert Plant, Halsey, Post Malone, Wiz Khalifa, N.E.R.D, Incubus PLUS the kings and queens of comedy, Craig Ferguson, Iliza Shlesinger, Nick Offerman, Craig Robinson and many more to round out the weekend. 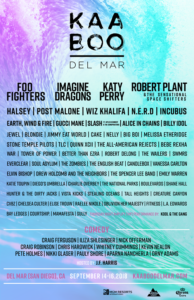 Passes for the multi-faceted fest are now on sale and there are numerous levels available. HANG LOOSE (GA) passes start at $249, while HANG FIVE and HANG TEN (VIP) passes are currently at $849 and $3299, respectively. HANG FIVE passes feature premium stage viewing, exclusive culinary options for purchase, private restrooms, access to the Thursday night AMPLIFY Sneak Peak Party featuring Kool & the Gang and more. Kaaboo is also offering up the HANG FIVE+ (Drink Package), new this year. Get the ultimate experience with HANG TEN, which includes everything from HANG FIVE plus access to on-stage viewing, exclusive meet and greet opportunities with Kaaboo performers, complimentary food and beverages, golf cart access and more. Learn more about the different ticket types at kaaboodelmar.com/ultimate-hang.

What makes Kaaboo different than the rest? It’s not just a music festival, but also a comedy, food and art show. All guests have access to the HUMOR ME comedy club, SoCal’s largest on site contemporary art fair including viewings of the live-action viewings of the outdoor murals and installations, gourmet food and drink and an on-site Vegas style nightclub.

This festival truly brings something for everyone, it is no wonder Kaaboo was nominated for the 2017 “Music Festival of the Year” by Pollstar Magazine. Rolling into its fourth year really stimulating all senses, Kaaboo stands as a leading destination music and arts festival. The fest is located at the Del Mar Racetrack and Fairgrounds in Southern California and San Diego celebrates this as the largest multi-day major music and entertainment festival with stunning views over the Pacific Ocean and pristine weather.

For a Good Cause

One other remarkable thing about this fest is the KAABOO KINDNESS program, which supports charities in the San Diego region and across the globe. One dollar per every pass sold is donated to featured charitable partners, including global partner, The Recording Academy’s MusiCares program, as well as three local charities including the San Diego Armed Services YMCA, Surfrider – San Diego Chapter, and Voices for Children.

You are not going to want to miss out on this incredible weekend in a truly stunning setting. Head over to kaaboodelmar.com for more information and get your ticket already!

Additional onsite festival experiences have been announced for the sixth annual Monster Energy Welcome To Rockville, Saturday, April 30 and Sunday, May 1 at…