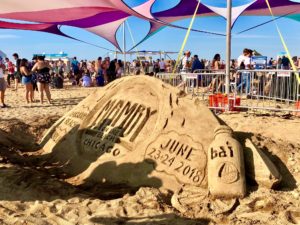 Chicago summers: may be short lived, but man, does this city know how to have a good time when the weather is warm.  This year marked the fourth for Mamby on the Beach music festival which took place at Oakwood Beach, just south of downtown Chicago.  With this being high on my list of favorites, it most definitely did not disappoint. The intimate two day festival, which took place over June 23rd – 24th, caters to everyone, between the diverse lineup, food and atmosphere, the fairly priced, all-age event is guaranteed to deliver good vibes.

Mamby on the Beach is many things, a music festival for sure, but the non-musical activities make it an all around experience. All activities were curated by Bam Creates—a local, unique theatrical event production company—so it was a sure fire thing the event would be immersive. From beach volleyball, the large emphasis on outdoor yoga and meditation classes, tarot card readings, wellness workshops, henna tattooing and a mass water balloon fight, fest goers had quite the stack to choose from to enjoy their weekend at Oakwood Beach. Also in attendance were various pop up sponsors, my favorite being skincare brand, Philosophy. Bringing along with them an insta-worthy canary yellow Airstream trailer and matching bicycles donning their cool new campaign, Simple, Not Basic. Snagging samples by Philosophy is my idea of a great festival bonus.

With three main stages, Community and Silent Disco stage, Mamby on the Beach offered up a fun and diverse lineup across the board. Headliners included Common, Spoon, Duke Dumont and Grizzly Bear on Saturday and Russ, Richie Hawtin and Cold War Kids on Sunday.  The names lower on the roster brought the heat and pulled in crowds as well – with AJR, Whethan and Jai Wolf being some of my favorites. Others on top of my list were Duke Dumont, who laid down hit after hit giving off such feel good vibes the whole Mixmag x Beatport Tent was jumping. Russ, the American hip-hop artist had the closing set of the weekend and had a sea of fest goers singing along to jams like, ‘Losin’ Control’ and ‘What They Want’ ending Mamby on a high note.

Other highlights from the weekend included Common bringing out fellow Chicago native, Chance the Rapper during his set, who is notorious for his surprise guest appearances.

Aside from the obvious reason I attend these festivals—the music—one of my favorite aspects is scoping out the fashion and what the latest fest trends are. Mamby may not be the largest festival where people feel the need to go all out in terms of fest ‘fits, but that didn’t stop some from giving me seriously ‘gram worthy attire. This year, there wasn’t a common theme like in those past where the flower crown was in its hay day, but I will say that small prints like palms and fruit were having a moment. I don’t think there will ever be a festival sans sequins, cutoffs or crop tops – but it’s those who go the extra mile who want to see and be seen that I live for.

Whether you are there for the fashion, the music, the atmosphere; where you’re an EDM junkie or live for the up and comers, Mamby on the Beach is the ideal Chicago fest. Taking place on the beach with the beautiful backdrop of the city, when the sunset hits that skyline, there’s nothing like it. It has an intimate feel, being so small, where you can walk across from Park Stage to the Beach Stage and run into a handful of people you know. Unlike other Chicago festival giants like Lollapalooza Pitchfork and Spring Awakening  – Mamby always feels like it is for the locals. This year was no different with Chicago natives like producer Whethan, Common and guest, Chance the Rapper on stage in front of their city.

Check out my photos from the weekend and be sure to head over to www.mambybeach.com for the official after movie which will be released soon! Like I said, Chicago knows how to party – which festival will I see you at next? Happy Summertime Chi!