Electric Forest has easily become one of my favorite festivals and this year it has solidified it’s place in my heart forever. I look forward to returning to Rothbury, Michigan every year despite the fifteen-hour drive from Boston. This year I attended both weekends, giving me plenty of time to explore the festival fully. EForest never ceases to amaze me, it’s constantly evolving in ways other festivals wouldn’t even try. There aren’t really words to describe how special Electric Forest truly is but I’ll try my best to paint a picture for you all. 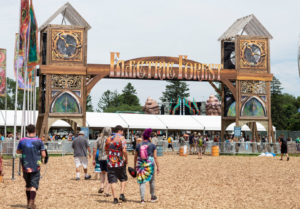 What’s great about attending both weekends is that I was able to go with the flow and be really present because I never felt a sense of urgency to see most of the artists. If I missed them weekend one I could catch them at weekend two. This allowed me to have the freedom to explore different artists I had never seen or heard of before. On Friday I saw Betty Who, she dawned a shirt that read “Who the Fuck is Betty Who?” which seemed fitting cause I had no clue who she was. I initially thought I would watch her perform a song or two but I ended up staying for the entire set and she left me wanting more. Her music was fun and upbeat, I was hooked as I watched her twirl around with her two male backup dancers. 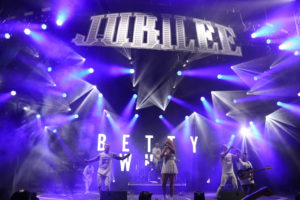 Another special performance from Friday Weekend One was a funky jungle vibe set from 29 Palms, which is made up of Ooah & Boreta from The Glitch Mob. Juaz was an amazing close to Friday night, he played at Tripolee and knew just what the people wanted. He drew in a crowd of his fans and people who were leaving the festival but stopped to dance.

Other impressive sets from Weekend One were Fisher, who threw down an amazing house set while hot air balloons flew over the stage. He teased the audience with his unreleased track “I’m losing it” that many were trying to Shazam. The track was released Friday, July 13th and is definitely worth a listen. Chromeo performed a set that had everyone singing along and remembering why electro-funk is such a great genre. Totally Enormous Extinct Dinosaurs (T.E.E.D.) played an intimate DJ set at the Forest Stage that got me hooked on his music. 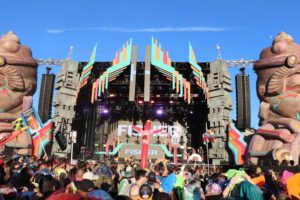 Bassnectar played at Sherwood Court on Saturday and you could feel the excitement in the air. Every other person had some Nectar-gear on and greeted each other with “Happy Nectar Day!” His set was captivating as he brought banger after banger. On Sunday Sherwood Court was taken over by Rüfüs Du Sol, who played a beautiful live set that had the crowd singing along to all their hits and enjoying the tracks from their upcoming album. I closed out Sunday night at Tripolee with MALAA. I had seen him play in Boston back in April and was a little bit disappointed so I was thrilled with his performance at Forest. It was that classic MALAA house set that I couldn’t get enough of.

Weekend Two was a gift cause I got to catch all the artists I missed the week before and I got to relive my favorites. Louis the Child played their fan favorites in front of a huge audience. A couple got married right before their set, proving that love is truly alive just like their hit song says. Jason Hann and Michael Travis the percussionist from The String Cheese Incident came together Thursday night to form Eoto. They played an improved set choosing their songs based on the energy of the audience.

CloZee found immense success at Electric Forest this year, starting with her set being moved from The Observatory to Sherwood Court the first weekend. She filled Sherwood Court despite replacing the originally planned set of Action Bronson. HQ took notice of this and gave her a second set time for weekend two and she played at the RV’s. Her style of electronic mixed with glitch-hop fit the vibe of the forest perfectly. 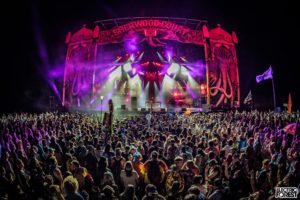 A favorite of the Forest and Michigan native, GRiZ, played a couple times throughout both weekends. He played a live set with a full band on Saturday of Weekend Two. The spectacle of it all is enhanced by his saxophone solos and his funk counterparts. One of the headliners for the night was The Glitch Mob, three longtime friend’s who are percussionists. They got the crowd on their feet, playing their more popular songs and remixes such as Nightcores Seven-Nation Army remix. 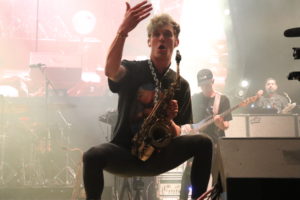 On Saturday, Tripolee hosted the mau5trap curated event with techno favorites that led up to a set by Testpilot, Deadmau5’s alter ego. Earlier in the day, I got down to an amazing house set by Chris Lake, which was a great segway into Claptone’s set. I was really looking forward to Lane 8 and he did not disappoint. It might have been the combination of his transcendental set with the heat lightning in the background that placed him so highly in my favorites over the two weeks.

Out of eight days I spent at Electric Forest, the last day was definitely the most eventful. GRiZ teamed up with Muzzy Bearr and Shooka to play a funky set at Tripolee. Towards the end of the set they stopped and it was announced that everyone had to evacuate the festival and return to their campsites and cars. A massive storm was rolling through the area but they assured us that it was going to be short-lived and we could return after it passed. Honestly, the storm was one of the best parts of the weekend, especially since Weekend Two was unbelievably hot. After an hour or two, the storm passed and we were able to re-enter the festival grounds. I stayed back for a little and watched the most magnificent sunset I had ever seen. The Forest has a way of bringing out the beauty in everything.

Once I was back in the Forest I made my way to Sherwood Court to see one of my current favorites, Rezz. As I walked over to the stage other festival-goers were whizzing by me in a full-on sprint to the stage once they got through security. Rezz knows what her audience and puts on a great show for them, this was the third time I had seen her this year and she keeps getting better and better. Space Mom, as fans affectionally call her, is killing the game lately with her unique dark techno sounds. I can only see her career growing as more join the cult of Rezz. 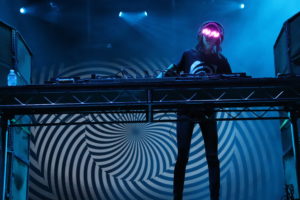 There were a lot of improvements to the camping and festival grounds this year. Shakedown Street (Main Street) in the camping section had lots of new seating areas and places to mingle with others. HQ made huge additions to The Brainery. The small tent on Shakedown Street was meant for creative workshops where people have the opportunity to learn and explore. After setting up my campsite Weekend Two I attended a Kirtan Workshop and Chanting at The Brainery. It was a really wonderful experience that allowed me to recenter myself in preparation for the upcoming festivities.

Within the festival grounds, there was the addition of The Carousel Club, a huge ballroom within The Hanger. It was a wonderful place to hang out and avoid the heat while listening to live music. I was thrilled to see that HQ had improved the sound at Tripolee and Sherwood Court since last year, I walked around both stages and didn’t find the same dead zones that I had the year before. Another major upgrade I noticed was that the porta-potties were never in bad condition, there was staff constantly restocking and cleaning them both inside the festival and the campgrounds. 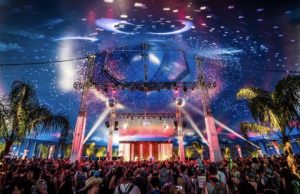 Festival food is so crucial to me in deciding if I give a festival a thumbs up or not. Electric Forest does a wonderful job of having a great variety that offers choices for any type of dietary restrictions. An added bonus is that some of the food vendors on Shakedown Street stay open 24-hours. So after partying at the RV’s all night you can get your fix at 5 am. Over the two weeks, I tried a lot of great food some of my favorites were Mike’s favorite grilled cheese, big mozz sticks, island noodles, black lemonade, and of course spicey pie. I also had the crepes at the vegan breakfast stand on Shakedown street about six times, specifically the Funkadelic crepe. The addition of the Cereal Bar was also a real crowd pleaser and a great place to just hang out. 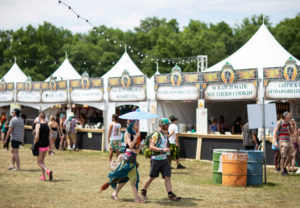 I recommend setting aside some time to fully explore Sherwood Forest. No matter how many times you’ve been there is always something new to find. Everywhere you go in the Forest there is art and beauty, the attention to detail is crazy. From fairy doors with little gifts left behind to a secret poetry brothel that you need a code word to get into, there is an endless amount to explore. And at night the Forest is light up in different hues of pink, green, and purple while lasers cut through the tops of the trees.

An aspect of Electric Forest that I love so much is how eco-friendly and community-oriented the festival is. HQ prides itself on being environmentally conscious, and they make a big effort to involve those who attend. The Electricology program is well publicized and I saw many people taking part in it. The program is based on a fun “ecopoint” system, and there are many ways to collect points. You can even trade them in for prizes like Eno hammocks, water packs, t-shirts, posters, and more.

For the second year in a row, HQ partnered with the Crystal Valley Care Fund to receive tons of gently used gear left in the campgrounds to support the local organization. They also ran a food drive, donating an astounding 35,712 meals. There are so many other community service aspects of this festival that make it so special. Electric Forest is partnered with the suicide prevention organization To Write Love on Her Arms. There is the Electric Forces program that invites veterans who face PTSD to integrate into the festival landscape, bringing specific military experiences to a wide variety of internships at Electric Forest. Overall, the Forest is the most accepting, progressive and caring festival community that I have ever been a part of. 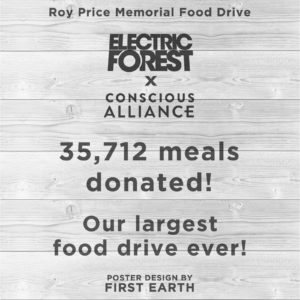 Electric Forest is one of the most magical places on Earth, nothing really compares to it. It’s like an adult Disney Land but with better music. Everyone is so friendly and they express themselves so authentically, which is a lovely thing to see. You can also tell that HQ really cares about its attendees and their experience. During the hottest days of Weekend Two, they were handing out water bottles to everyone that walked into the festival, it was a small gesture that showed they really cared about our well being. I can’t recommend Electric Forest enough, it’s my home away from home and I want to share it’s magic with as many people as possible. So I hope to see you all next year!