New York City is host to plenty of music festivals but none as unique as Elements NYC Music and Arts Festival. The one-day boutique festival hosted by BangOn!NYC takes place at the New York Expo Center in the Bronx and is a must for anyone with a passion for creative art and EDM. This year marked the fifth anniversary for the festival and to celebrate they brought in some incredible acts and artists to transform the space into something truly special. The lineup consisted of artist from all across the electronic music spectrum like Bassnectar, Emancipator, Jade Cicada and house music masters like Justin Jay, Sacha Robotti, SNBRN, J. Worra, Sage Armstrong, Sam Blacky and more.

During the first half of the day there were pockets of rain showers which caused some delays in the schedule. The crowd didn’t mind though cause they could seek shelter in the massive warehouse that housed the Water Stage. When the rain and lightning storm warning finally cleared festival attendees explored the entirety of the grounds and all the art installations it had to offer. 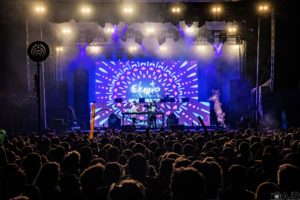 There were four stages, each one inspired by a different element. The Water Stage housed artist with  more upbeat and flowing sounds. SNBRN, with his tropical house vibes, played a lively sunset set in the warehouse. His set was followed by a Goldfish who grooved with the audience as they incorporated a flute, saxophone, and piano in their performance. At the Air Stage you could find ethereal sounds coming from performers like Dance Spirit and Lost Desert. The light melodies and celestial influence of the music had people entranced as they swayed to the music.

The Earth Stage featured heavy acts like Subtronics, Emancipator, and Bassnectar, who played mind blowing sets that brought a lot of diversity to the lineup. Subtronics wowed the crowd with some explosive bass and Earth shaking beats. Emancipator brought the tempo back down and mellowed out the crowd with his chill ambient sound before the legendary Bassnectar took the stage. The bassheads were in full force at Elements NYC, they trudged through puddles of mud to see Lorin play banger after banger. Nectar didn’t hold back, his captivating set paired with the dazzling lights and lasers had the crowd mesmerized.

Personally, my favorite stage was the Fire Stage, which hosted the iconic Dirtybird label who were serving up some delicious house music all day. The Fire Stage lived up to its name as flames shot up around the DJ booth, accenting the music at the perfect spots. The multitalented, Sam Blacky, absolutely crushed her set with track after track being an absolute crowd pleasure. Brazilian house producer, Bruno Furlan, brought some South American flavor to the Dirtybird lineup, not to mention the audience could see he was having a blast while doing it. Sacha Robotti and Justin Jay closed out the stage with some deep house and playa vibes concluding another wonderful Elements NYC Festival.

For a one-day festival there was a lot of attention put into the art and providing the festival-goers with an amazing interactive experience. There were dancers and fire breathers who moved to the beat and put on a show for the crowd. People explored The Vortex Labs, where women dressed as futuristic robots greeted and directed guest through a collection of silos filled with different neon art pieces that one could get lost staring at. Near the Earth Stage there was a glass room where people could get some much needed stretching in by partaking in silent disco yoga. The Water Stage had a pirate ship and a few metal towers sprinkled throughout the warehouse that people could party on and get a better view of the stage. And roaming around the grounds were characters dressed up to dance and take pictures with festival-goers.

Elements NYC Music & Arts Festival battled the elements and came out on top, not allowing some rain to ruin the party. With a wide range of electronic genres the festival was a success in bringing in music lovers of all types to the waterside location for a day of incredible music and vibes. If you missed Elements NYC but are interested in experiencing what BangOn!NYC has to offer check out their upcoming event Warehouse of Horrors in Brooklyn this October. 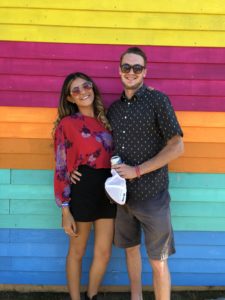 Travis Barker Announces 2016 MUSINK Lineup With Taking Back Sunday, Circa Survive, and More!

When planning out your festival calendar this year, Travis Barker’s 9th Annual MUSINK is not one you will want to miss. It’s officially festival season and…