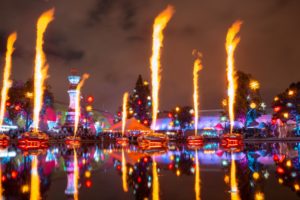 This past weekend, March 22 and 23, Beyond Wonderland SoCal delivered an awe-inspriring festival experienced filled to the brim with tantalizing characters and delicate details which have left attendees buzzing days after its conclusion. Having drawn more than 110,000 fans from near and far, Insomniac has once again demonstrated just how high they have pushed the bar for EDM music festivals. Maybe it was the professionally delivered sets or the collective positivity from the crowd or maybe even the fun surprises I found myself gasping at, but either way Beyond Wonderland SoCal 2019 will truly be a festival I will remember fondly for forever.

The short and sweet way to describe Beyond’s overall stage setups and production value is utterly dazzling. Since the event ran from 5pm-2am both days, very little of the festival occurred in daylight and it was clear the majority of time and money went into the numerous LED screens and lights that hypnotized in the dark surroundings. Most memorable this year, in my opinion, was Mad Hatter’s Castle, featuring a kaleidoscope of diamond shaped LED screens that loomed above you. However, I couldn’t help but find myself also captivated by Caterpillar’s Garden where the DJ of the hour towered more than 100 feet above the audience incapsulated by a blinding hexagon. If you found yourself overwhelmed by the lights and projections, The Looking Glass was the perfect place to ground yourself. Located in a small tent central to the festival, a playful house DJ sat within a deck of decoration surrounded by hundreds of people gently bouncing to the groove or taking a rest upon the soft and forgiving grass. Most impressive of all was no matter what stage you found yourself looking upon, you were guaranteed a quality sound experience. The entire weekend I experienced no sound bleed what so ever and no matter where you stood in the audience (even directly outside the structures) the music projection was clear and loud. I felt incredibly spoiled to not have a single complaint regarding the production quality of each and every stage. 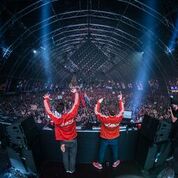 I could easily take the next 20 minutes of your life to gush about the stellar performances I was lucky enough to witness first hand at Beyond. I still find myself amazed that upwards of 95% of the artists I saw not only met my expectations but also exceeded them. Having attended a multitude of alternate EDM festivals I can say from experience that this is usually not the case. I am unsure if it was pure luck or if it was greater than usual preparation by the artists to truly impress this massive audience (and to do Insomniac good), but each artist seemed ready to inspire and leave a lasting impact on every audience member. It was almost as if the expectations for performances was set quite high for this festival and on top of that each artist was trying to knock the standard out of the park. The most memorable sets from the weekend for me will be Rezz, Zhu, and Deadmau5. Although I have previously seen all three of these artists multiple times, each one of them brought something original and unheard to the stage. It was clear that I was not the only one captivated and the energy from the crowd during each of these sets was overwhelming. Zhu delivered an almost entirely new set, catering to the crowd with his “music for festivals” which he canceled his most recent tour to prepare. Different from her self-titled tour, Rezz mixed an awesome combination of originals and other artist’s music to generate a set that had the entire audience head banging for over an hour. As always, Deadmau5 hypnotized the audience with extended live plays of his most famous songs combined with lulling outros that left me devastated when the set came to an end. The biggest surprises of the weekend for me were Carnage and Sage Armstrong B2B J. Worra, two utterly fun sets that had everyone dancing their booty off. Finally, my favorite part of festivals is always discovering new artists in person that I fall in love with and continue to listen to and follow post festival. For me, Kendoll and Hook N Sling are the two new artists that I discovered and have been blasting all week long. I am incredibly excited to continue to follow them and hopefully see them live again soon.

A plus side of the location of Beyond Wonderland being at the NOS Events Center in San Bernardino is that it is a shuttle ride away from the hotel circle located in Ontario right outside the Ontario airport. There are an incredibly large amount of hotels in this small circle to choose from, and a shuttle pass can be purchased from Insomniac to be driven to and from the venue from your hotel. I stayed at the Holiday Inn Ontario Airport and had a wonderful experience there. It was only a short walk (very nice and safe) from the Best Western Plus where the shuttle picked up from. By taking the shuttle I avoided long Uber drop off and pick up lines in addition to the incredibly long long for the shuttle to take you to the parking lots. Getting to and leaving the festival was a breeze for me because of this reason and I highly suggest checking out hotel shuttle passes in the future!

Beyond Wonderland provided ample options for food, drinks, and even souvenirs. From pizza to vegan chili to salads, any hungry attendee was guaranteed to find food that would please their taste buds. Both alcoholic and non alcoholic drinks were easy accessible and this year electrolyte drinks were even being sold to replenish yourself from a weekend of sweaty dancing. I personally always drink a Vitamin water before the festival in the morning and eat a very large meal to avoid the expensive festival costs, but I found myself captivated by the delicious options and wasn’t disappointed when I gave in. In addition to the impressive food and drink options, an incredibly large amount of rave attire was being sold along side Insomniac souvenirs and artist merch.

GA water stations and bathrooms were unfortunately crowded for most of the festival. With more attendees then ever before, I had hoped that the number of water stations and restrooms available for GA use would increase but I am honestly not sure that they did. I hope that in future years Insomniac considers adding additional stations between stages, particularly around the Queen’s Domain.

If you have the opportunity and funds to attend Beyond as VIP, I highly suggest you do. I was lucky enough to attend as VIP myself this year (first time for me) and it was an incredible experience. The biggest reason I say this, and I cannot emphasize this enough, is the complete lack on lines for the bathroom and water refill stations. As someone who attends festivals for specific artists and really wants to see as much as possible in the small amount of time I get within the gates, having no lines for the bathroom and water allowed me see at least two sets per day (between other sets) that I would not have gotten to see otherwise. In addition, VIP allowed you to enter Cheshire Woods (a completely indoor stage) without waiting in the general line, which was useful if you were running between this stage and one of the outdoor stages. However, it placed you in a separate square on the right side of the stage that was sectioned off and you could not hop into the crowd without waiting in the GA line first. Each stage’s VIP area differed slightly, with the most memorable one being Queen’s Domain. Free dessert, kandi making stations, fun photo opportunities, and additional food vendors made the side stage area feel like a peaceful haven outside the wild crowd. The extra space came in very handy for big name artists such as Zhu where I was able to see the entire set without being trampled by the crowd.

My one main qualm about Beyond Wonderland was the uninformed staff. This seems to be a frequent complaint I find myself repeating after most festivals I attend and I am not sure why. Much of the staff seemed unable to answer questions and direct attendees to the correct locations. I additionally was told of a few horror stories about interactions with paramedics in the medical tents which included mockery and ended in a regret of searching out help. I understand and sympathize that attendees can be loud and obnoxious but I hope in future years staff are trained to be more understanding and truly informed.

Going Above and Beyond

I genuinely believe that Beyond Wonderland is a perfect representation of what attention to details can do for a festival as a whole and how it can change its lasting impression on attendees. I found myself giddily pointing out the smallest of things throughout the festival that summed to a total immersion that I find hard to feel at festivals. The theme of Alice and her adventures in a psychedelic wonderland was carried through in every possible way, from the tens of hired performers that continually wandered through the festival and even visited the stages to the street signs placed throughout to help you find different places in Wonderland. I found myself forgetting that I was actually standing in a parking lot until I was outside at the end of the festival waiting for a shuttle. I realize that this is not an easy thing to do and I appreciate that Insomniac took no short cuts to provide an incredible festival experience.

Stay connected with Beyond Wonderland:

SONISPHERE 2014 coincides with the 40th anniversary of live music at the legendary grounds of Knebworth House, and to celebrate, some very special events…