The Next Major Festival In Downtown LA

ROW DTLA in Los Angeles, California will host the very first ALL MY FRIENDS festival on August 18th – 19th, 2018. The organizers released part of the lineup this week, and it is already stacked with some of the biggest names in trap, r&b, and house music. So far, we have the trap god Gucci Mane, r&b styles from Jhene Aiko, the rapper M.I.A., and a variety of electronic music from RL Grime, Jamie XX, and Armand Van Helden. A number of additional acts will be released over the next few months, so keep your eyes out for the next phase of the lineup!

ROW DTLA is a renovated industrial complex in downtown Los Angeles. The sprawling development covers over 30 acres, and is the site of gentrification for a host of old commercial buildings. An assortment of new businesses have popped up in the area, including food vendors, retailers, and art galleries. Most of these attractions are within walking distance from the festival gate, so they will be easy for ALL MY FRIENDS attendees to access. You can learn more about ROW DTLA and it’s amenities on their website. 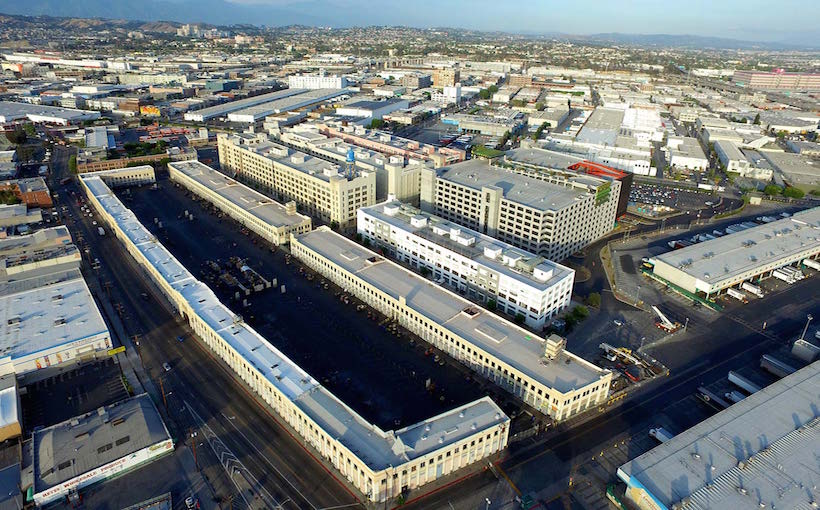 A large courtyard within the complex will host the music for ALL MY FRIENDS. There will be three separate stages within the courtyard, each with plenty of standing room. A variety of food and drink vendors will also be available within the venue, and there should be comfortable spaces to enjoy their offerings. Large shade structures will help to shield guests from the California sun, and give them a comfortable place to relax in between shows.

For a variety of reasons, camping of any kind is forbidden on the property. The area surrounding ROW DTLA can be unsafe, so make sure that you have a plan for accommodations and travel to/from the venue each day. There are a myriad of hotels to choose from in the area, and one of them is bound to fit your budget.

Electronic Artists at ALL MY FRIENDS

Although his specialty is trap music, RL Grime plays a wide variety of electronic music at his live sets. He is famous for mixing things up – vocal EDM swiftly morphs into drum-and-bass, then drops into hybrid trap music. While there are occassional relaxing moments during his sets, it’s always hard to tell what’s around the corner. This video of his performance at EDC last year provides a good preview of the energy he will bring to ALL MY FRIENDS.

Jamie XX is a house music producer, and member of the British indie-pop band The XX. His solo work infuses elements of trap, house, trip-hop, and a variety of other electronic sub-genres with Indie-pop. He uses an eclectic variety of sounds to construct uniquely unusual beats, which perfectly compliment his spacey and introspective vocals.

Armand Van Helden is a legendary producer who helped to lay the building blocks for today’s house music scene. More than a decade ago, he was releasing house music classics like “I Want Your Soul” and “Hear My Name”. His set will consist mostly of fast-paced, high-energy house music.

Listen to the official AMF playlist at https://amfdtla.com/ or on Spotify by following this link.

Hip-Hop and R&B at ALL MY FRIENDS

Gucci Mane is a pioneer of trap music, and an icon in the modern rap scene. His work has influenced huge groups like Migos, and helped to invent a whole new style of rap music. Gucci has had his share of controversy over the years, with legal troubles that often kept him from producing.

Jhene Aiko is an r&b superstar who has been nominated for multiple grammy awards and exploded into popularity over the past few years. She is sure to put on a passionate and energetic show, designed to showcase her incredible voice. Her music incorporates elements of hip hop, electronic, trap, and soul into a unique style of r&b that pairs well with anything.

Singer, songwriter, and political activist M.I.A. is sure to put on an interesting show. The rapper has been producing hit music for more than a decade now, and creating waves all the while. Her set will be fast paced, exciting, and infused will all types of hip-hop, rap, and trap music.

Listen to the official AMF playlist at https://amfdtla.com/ or on Spotify by following this link.

ALL WRISTBANDS CAN BE PURCHASED HERE

The Tenth Edition Of Parklife Festival Returns With Cardi B, The Streets, Khalid And More

Parklife Festival 2019 is returning for its tenth edition. The Manchester festival welcomes festival-goers on Saturday & Sunday June 9th at Heaton Park. Cardi B,…