The Inaugural INKcarceration music & tattoo festival will truly be one of a kind. More than thirty of the biggest names in rock music will be performing at the Ohio State Reformatory on July 13-15, 2018. The killer lineup includes acts from Rise Against, A Day To Remember, Bush, Black Label Society, Clutch & many more. The event will also be home to a massive open-entry tattoo competition with over 25 categories, a rock & roll circus sideshow, and a recently announced “food truck extravaganza”. The organizers want to make one thing clear: INKcarceration will be far more than just an awesome music festival. 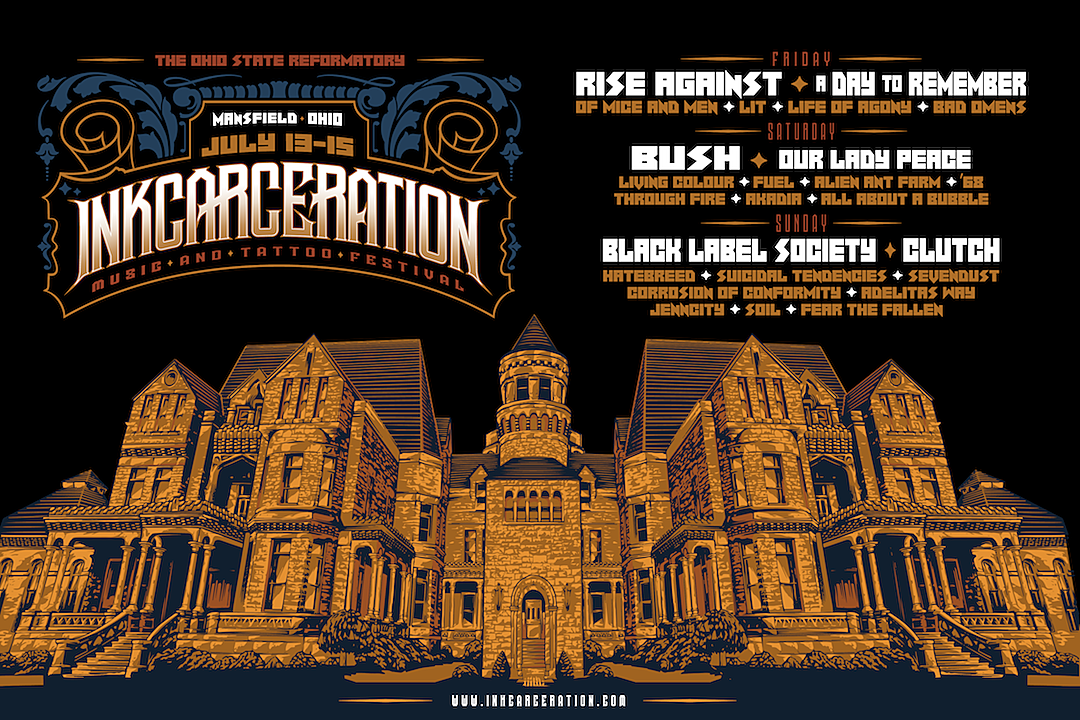 Battle of the Bands

The organizers of INKcarceration festival recently partnered up with ReverbNation – a social media platform that connects new artists with the world of music. Through this partnership, they forged an epic battle of the bands competition for INKcarceration that received over 1,600 submissions. There are only four available slots to play during the festival – one on Friday night, one on Saturday night, and two on Sunday night. After much deliberation, the judges have finally selected four bands worthy of playing alongside the biggest acts in rock music.

Friday’s line-up will feature Avenues, from Milwaukee, WI. Saturday will feature Nikol, from Raleigh, NC. On Sunday, The Unlawful from Bradley, IL and Absolute Hero from Columbus, OH will help to close out the event. All of these bands consist of local heroes who are finally getting a chance to play in the spotlight. This could be the event that propels one or all of them into stardom, so make sure to check out their sets if you have a chance!

A lot of music festivals are tragically short on quality food and drinks…  but INKcarceration will not be one of them. Twenty-five of the highest quality food trucks from Ohio and the surrounding area will be in attendance, serving up a huge variety of grub and refreshments. Most of the vendors will be serving up Mexican and American comfort food, so don’t plan on counting calories if you really want to enjoy yourself. A full, alphebetized list of vendors can be found below. Clicking on their names will direct you to the facebook page for each truck, where you can preview their offerings.

Tattoo culture will be a huge part of the inaugural INKcarceration festival. More than sixty acclaimed tattoo artists will be in attendance, representing some of the most respected studios in America. They will be demonstrating their work in public all weekend on attendees who are looking to get some ink. If you’re looking to work with a specific artist, it is highly recommended that you make an appointment ahead of time. A full list of studios/artists can be found on the festival’s website at http://inkcarceration.com/tattoo/.

INKcarceration festival will also be host to a tattoo competition with over 25 categories. The entry fee is only $10.00, and each category will have first, second, and third place prizes. Famous artists Krazy Ken Phillips and Troy Denning will judge the competition, alongside TV personality Mistress Juliya. So far, the only category they’ve only announced is “best in show”. To keep things interesting, the other categories will remain a secret until the day of the show.

Ink from Drawn To The Surface Tattoo, one of many studios attending INKcarceration 2018.

The Ohio State Reformatory was a fully operational prison between 1910 and 1990. It has an extremely eerie atmosphere, and many believe there is a supernatural presence on the grounds. The former prison yard and surrounding fields will host INKcarceration festival, with the reformatory in the backdrop. The stages, exhibits, and amenities will all be outside, but attendees will still be able to tour the reformatory if they dare. You may recognize the reformatory as the “Shawshank Prison” from the 1994 film The Shawshank Redemption.

The Atmosphere & How to Attend

The atmosphere at INKcarceration festival will be interesting to say the least. Rock & Roll fans and tattoo enthusiasts come in all different forms, and many of each will flock to Central Ohio for this huge inaugural event. While there are sure to be lots of metal heads, decked head-to-toe in black clothes and ink, people from every walk of life are expected to attend. Curiously, this is an all ages event and kids 10 and under can attend for free… However, the organizers make a specific disclaimer on their website that “you might want to leave the young ones at home for this”.

Wristbands are priced as low as $60.00 + fees for a single day, or $165.00 + fees for the whole weekend. VIP Packages are available at a higher rate. Camping is available offsite at a ground that’s roughly 5 miles from the festival area. Shuttles are available, and the price is included with your camping pass. More FAQ’s are answered on the INKcarceration website.

WRISTBANDS AND CAMPING PASSES CAN BE PURCHASED HERE

[youtube https://www.youtube.com/watch?v=dquO_by8GI8]   The excitement was real when we heard that Bonobo would perform his final headlining set from Migration on July 7 at Hamilton’s Royal Botanical…