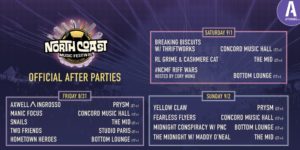 Summer’s Last Stand is less than three weeks away and Chicago, myself included, could not be more excited. The intimate music fest, North Coast Music Festival, arrives in Union Park in the West Loop over Labor Day weekend. This year has some real banger performances lined up and you can check out the full lineup in my North Coast preview here. Now we all know the fest ends at 10pm each night, but that doesn’t mean you have to stop partying. The official North Coast Afterparties have been announced and you will want to snag tickets to these events before they sell out.

Some of the best venues and clubs around the city will play host to after hour shows including Concord Music Hall, the MID, Prysm, Bottom Lounge, and Studio Paris. Sets will range from hip-hop, edm, jamband, bass and everything in between.  Check out the full list below and make sure to scoop up your tickets before it’s too late!

Grab your tickets now and I’ll see you out late night for all that North Coast weekend has to offer. Cheers!