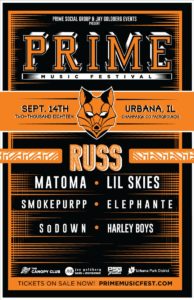 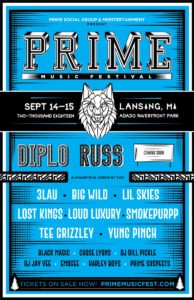 Prime Social Group carefully explores the intersection of hip-hop and electronic music resulting in a supremely curated lineup. It includes some of the most impressive names in the industry. There will be festival headliner Russ taking main stage. Diplo, Matoma, Lil Skies, Smokepurpp, Elephante, SoDown, The Harley Boys, and more will also be included at this years festival.

Taking the main stage this year is hip-hop kingpin Russ. Only half way into 2018 and he’s already gone platinum with his first major-label debut There’s Really a Wolf. He also hit double platinum and gold with multiple singles including “Losin Control” and “What They Want”.

Additionally, headlining the EDM portion of the bill is the king of tropical house, Matoma. He is best known for his dance-oriented tracks like his remix of Notorious B.I.G.’s “Old Thing Back”. That hit over 222 million plays on Spotify, while his track “False Alarm”  hit over 150 million Spotify plays. Taking 2018 by storm, Matoma dropped his new track “Lonely” featuring MAX and announced the impending release of his follow-up LP, One in a Million.

All in all, for more information on Prime Music Festival, follow their socials.

It’s Time to Reunite on the Farm, Bonnaroo is Back!

Finally!!! We will get to reunite on the farm with the Roo family! Bonnaroo is back and better than ever. This year’s Roo won’t…