The time for festival-goers to flock West to Goldrush Music Festival grows closer and closer. Relentless Beats has recently released several key updates for the second annual Goldrush Music Festival. Fans now have access to the final touches to its massive lineup, an artist by day schedule, the Desert Hearts takeover and after party.

The festival is returning to Rawhide Western Town in Chandler, Arizona, this September 29th and 30th. It’s one of 2017’s best received new festival experiences. For 2018, Goldrush will push further into the Wild, Wild West with a goldmine of electronic dance music and hip-hop talent. Showcasing artists across four stages, each with its own distinct musical focus and vibe, Goldrush has added:

In addition to these added artists comes the Desert Hearts Takeover all-day Sunday and the Superstitions After-Party to close out the weekend.

These final additions to the Goldrush lineup join over 25 previously announced artists. And now, they have been slotted on their respective days. 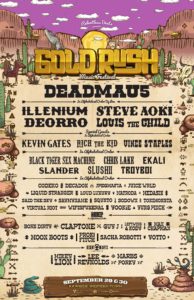 On Sunday, September 30th, the darling of the West Coast house and techno scene, Desert Hearts, will takeover the The Hideout stage.  Featuring the DH family of: Mikey Lion; Lee Reynolds; Marbs; Porky and special guests: Guy J and Leftwing & Kody, the crew will bring its intimate experiences of sonic joy to Goldrush 2018.

Don’t want the party to end there? Once the festival is over, you can continue the party with the Superstitions After-Party. It is another Desert Hearts takeover featuring the original core four of the movement.

VIP passes will be available at two levels. Standard VIP, including everything that a GA ticket provides plus express VIP entrance, a commemorative lanyard, access to VIP lounge, access to VIP viewing deck, premium restrooms and passed desserts in the VIP areas. Platinum VIP includes everything that the Standard VIP pass includes, plus: complimentary drinks, side stage viewing at the Golden Gorge stage, access to artist hospitality lounge, steakhouse quality dinner, exclusive festival gift bag, and festival concierge. You must be 18 for Standard VIP and 21 and up for Platinum VIP to purchase. Table service will be available at the Golden Gorge stage.

All in all, for more information on Goldrush Music Festival, follow its’ socials: