Electric Zoo 2019 is less than a month away! I am screaming with excitement and I hope you are too. If you think you are prepared for what New York’s most anticipated music festival is bringing to Randall’s Island Park this year, think again. Electric Zoo: Evolved has announced its stage-by-stage daily line-ups for the big event happening over Labor Day weekend August 30, 31 & September 1 at Randall’s Island Park in New York City. It’s almost time for time schedules to be released, which also means it’s almost time to start stressing about conflicts. Although there is always conflicts at music festivals, Electric Zoo has created the perfect lineup to show you a great time no matter what.

Kicking off the festival on August 30, Brownies and Lemonade—a group of friends at its core from Los Angeles who are bonded by their love of music and a good time–will make their mark on the Riverside stage with Getter, 4B, Peekaboo and many others.  There will also be a unique sunset set from American house mainstay Kaskade.

Sunday, September 1 the Riverside stage will house Seven Lions Presents Ophelia. It will showcase the finest of his label including  Jason Ross, Kill The Noise, Said The Sky, Blastoyz, Wooli and more. The Hilltop Arena will host NGHTMRE & Slander Present Gud Vibrations featuring a line-up especially curated by the two artists including back to back and new artists sets represented including Wave Dash, Kavion and Yako.

The West Coast’s freshest brand ALL MY FRIENDS curated by DESTRUCTO steps in with a stage the entire festival can enjoy. It welcome Malaa, Anti Up, Camephat, a b2b from Volac and Plegmatic Dogs and Solardo among others.

All three days of the festival, the main stage will rage with performances ranging from talent such as Above & Beyond, Skrillex and Boys Noize’s notorious duo Dog Blood, and Eric Prydz.   Prydz will also make a second turn on Saturday, August 31 with his Pryda Arena featuring also Joris Voorn, Yotto and a live set from Ben Bohmer. 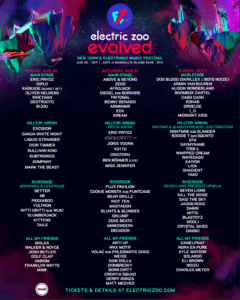 From the earliest memories of Electric Zoo, the festival now celebrates Electric Zoo: Evolved. It commemorates the future for the legendary event with a whole host of talents that are worthwhile to see perform.

For the Electric Zoo veterans and even the new-comers, the festival website provides a little taste to get you excited to get to NYC this labor day weekend.

“It’s been one heck of a transformative journey since we started a decade ago. As you walk down memory lane (because we’re suckers for nostalgia), recall the year that you met your current bae at Wild Island; The 6th Boro where you discovered one of your favorite new artists; or catching that epic Marshmello set at The Big Ten just last year.

It is said that change is not only a natural part of life but the only way to reveal true beauty. Just think about the metamorphosis that a caterpillar undergoes to become an exquisite butterfly. It’s pretty mind-blowing. Thus, we’ve taken such inspiration and tied it into this year’s theme, Electric Zoo: Evolved.”

FestPop has had the incredible opportunity to attend Electric Zoo for the past 2 years! In 2017, Electric Zoo: The 6th Boro welcomed Elephante for the first time to play on not just any stage but the main stage! FestPop Staff Writers got the chance to interview the progressive house master during their time at The 6th Boro. In 2018, Electric Zoo: The 10th Anniversary had Marshmello, Zeds Dead, and Tiesto close each night of the festival. FestPop Staff Writers danced even while getting their food the music was that good.

So, speaking from experience we are more than ready to be blown away with what EZOO has planned for 2019. I will say, these themed stages are already signs of many good memories for us. Electric Zoo has a great transportation system, an amazing food array, and multiple stages that please everyone. The veterans of EZOO are a welcoming crowd. The theme Evolved is a welcoming journey.  If you are new, you are welcomed to be a part of this transformative experience.

A little last minute and need help booking your airfare and accommodations for Electric Zoo: Evolved? Look no further! FestPop now offers assistance in getting you to the festival of your dreams. Just search the festival you want to attend on FestPop and let the booking begin!

All in all, for more information about Electric Zoo, follow its’ socials:

At FestPop one of our favorite things in the world is discovering brand new music festivals, but what we love even more is discovering…