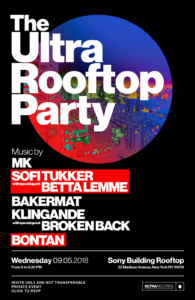 Ultra Records held an event on September 5 at the Sony Music building across from Madison Square Park. The exclusive event featured Ultra artists, MK, Sofi Tukker, Betta Lemme, Bakermat, Klingande, Broken back and Bontan. Guests entered the building and were escorted to the rooftop where there was two open bars to enjoy. Throughout the three hour event, everyone was holding their drinks and hands in the air while dancing to the tunes from the famous DJs.

The main performance of the night was from the duo, Sofi Tukker. They performed as the sun set behind the views of the Empire State Building. The up and coming musical act performed some of their well known songs that got the crowd dancing even with Sofi herself. Their single, “Everybody Needs a Kiss” with Benny Benassi was a crowd favorite as well as their other songs, “Drinkee” and “Best Friend.” “Batshit,” also part of their collection of music, got the crowd screaming the words and ended the night with a positive vibe. For those of you who aren’t familiar with Sofi Tukker, they are an American duo from New York City. For months they have been traveling around the world and performed at Ultra Miami this year. In 2017, they were nominated for a Grammy award for Best Dance Recording. Sofi and Tukker offer techno music with a unique twist of their own. They truly stand out in the EDM world and will be a big name in the near future.

TYGA KICKS OFF DAYLIGHT BEACH CLUB GRAND OPENING WEEKEND WITH HIS 2017 RESIDENCY AND THE HOTTEST POOL PARTY OF THE SUMMER, LIT SUNDAY’S Performances…